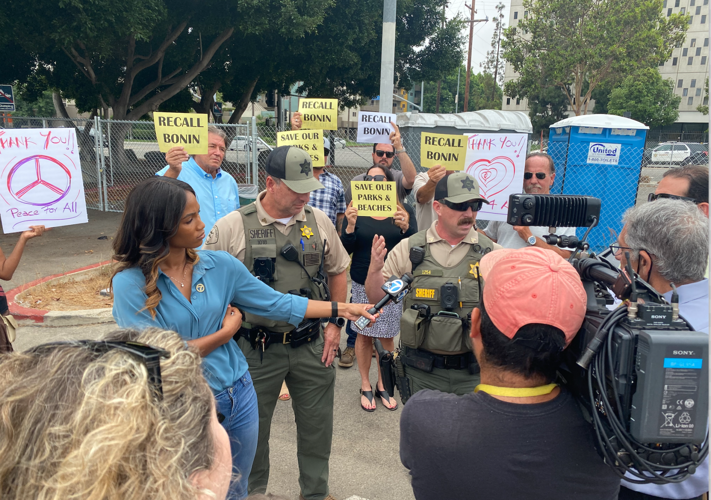 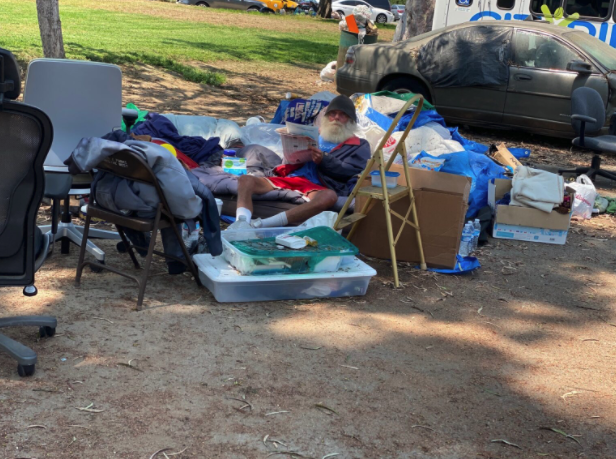 This man, “Hank” is living in the Westchester Senior Center Parking lot, across from the Library and CD11’s Westchester headquarters. (Photo courtesy/Circling the News)

The Los Angeles Sheriff’s Homeless Outreach Services Team (HOST) was on hand Tuesday, July 27 to assess a growing homeless crisis at Westchester Park. The park currently has an estimated 75 tents with up to 100 unhoused individuals now calling the area home.

As described by area resident Tom Brewster, the problem has put an end to a majority of sports at the park, including baseball, La Crosse, and activities at the senior center located in the park. “It’s an ongoing issue that our park has been taken over by the homeless. Mike Bonin has done nothing about it,” said Brewster.

“All we hear is we are going to do a study. We need action; we don’t need more studies. We can’t have 75 homeless people take over our park so the rest of the community cannot use it. It doesn’t make any sense,” said Brewster.

A recent report in Circling the News, Homeless Encampments Scare Away Kids and Seniors at the Westchester Recreation Center, shows how much of an impact the encampments have on the park and the senior center. The Westside Current is publishing the story (below) in its entirety with permission.

On July 19, Circling the News walked around the senior center, which was supposed to reopen on July 26. But seniors have said they don’t feel safe walking past the increasing number of homeless who have taken over the exterior of the building.

Westchester is an 11-acre park, and includes the senior center, a skate park, a swimming pool, tennis courts, a library, three ball fields, a playground and the library. Portions of the park have become inaccessible for kids and seniors because of the presence of so many homeless living there in tents. The library has had to hire a guard.

CTN spoke to several transients, including “Hank” who said he has been living in Westchester since 1952 and at the park for about the last 10 years. He said that a lot of new people have moved to the park, and he suspects they have mostly come from Venice.

Hank is 70 and has a sister in New Mexico that he hasn’t spoken with in about five years. CTN asked him if he would take housing.

“Not on the conditions that are offered,” he said. “LAHSA [Los Angeles Homeless Services Authority] takes 30 percent of your income, and you have to pay for utilities and cell phone. It becomes more expensive.”

Three PATH officials were driving to different tent sites on the sports fields, where people are camping illegally. CTN asked the officials if they could talk to Hank, who needs to move into housing.

CTN spoke to “Hudson,” who had just moved here last week from Playa del Rey because Westchester is “generally pretty mellow.” His tent was next to a man who had about 10 little kid bikes and was taking them apart for the pieces.

Both were asked about the shooting that had occurred three nights earlier. They pretended like there hadn’t been a shooting. “What shooting? We didn’t hear anything.”

But after it was explained that the shooting had been recorded, Hudson said, “There were about eight people shooting.” He was by the library, which was close to where the shooting occurred—and someone told him to stay down, which he did.

Next to the tennis courts, tents were backed against the fencing. CTN was warned that the most central tent had “dangerous” individuals.

Next door, in the mouth of his tent, was DJ, a young man from Jersey City. CTN asked how he happened to wind up in Westchester. “A long series of unfortunate events,” he said. He was told it sounded like a book and he smiled.

Asked about his neighbors, he just shook his head, then said he had to leave. He zipped up his tent and asked CTN, “Why did you want to talk to me?”

He was told, “Because I can tell you are a good person.” He smiled. His dog remained sleeping under a small awning as he walked off.

The ball fields, which were filled with kids in 2019, have become the front yard for about 20 tents. Permits for the fields were not given out by L.A. Recreation and Parks until last month, but in order for youth sports leagues to resume, these people who are illegally camping will have to move.

Residents have complained that the fields have not been maintained during Covid – and after repeated complaints, maintenance people were out on July 16, working on the gopher holes.

Rugby, lacrosse, soccer and baseball have used the fields for years. Rugby has been using the fields for five years and the team was initially told that fields would not be permitted this year. The team no longer has a home field and must travel to San Clemente, San Juan Capistrano, Long Beach, Pasadena, San Diego or Beaumont almost every weekend.

In a survey, rugby league officials answered that “In the winter we must practice with lights because our practice occurs after 6 p.m.  There aren’t enough parks in L.A. and there are even fewer that have lights. With the competition between all the sports as well as Adult/Youth competition for fields, we would be greatly impacted if any field at Westchester Park, the three baseball diamonds or multipurpose field, were taken out of service due to the homeless situation.”

The league said that children who used to routinely meet in the park are afraid to play there now. The league was asked if they had requested security from Rec and Parks or Councilman Bonin’s office.

“Yes,” they replied, noting that Bonin’s District Director Hannah Levien said it was Rec and Park’s responsibility and that it was not under LAPD jurisdiction.

The Del Rey Little League, which generally has 310 players, was told in February this year there would be no permits because of the Safe Parking program.

League officials acknowledged that because of the homeless, “Parents do not want their children to use the park.” That league also called Levien in Bonin’s office about security but were turned down.

In youth leagues, coaches, referees, umpires (and even volunteer parents) are required to be fingerprinted to ensure that there are no prior child abuse charges.

Annually, the individuals running leagues are required to take Safe Sport, a program that teaches about hazing, bullying and abuse.

One resident asked why the homeless who are allowed to be close to children are not required to take the courses. How would someone know if a pedophile were living in one of the tents? Criminal checks should be required of all who are in close proximity to children, but that hasn’t happened in L.A. City parks.

The swimming pool, although opened, only had a few swimmers. Parents don’t feel safe taking their kids through a parking lot filled with homeless people.

Drug use among the homeless has been reported and there are gangs that are fighting for turf among the homeless. Residents obtained police reports for the park from June 21 through July, but were told they could not look at the 911 calls unless they filed a public records request.

A new park director at Westchester has been on the job for a month. She had managed to get eight kids signed up for summer camp and was going to offer a girls volleyball clinic and a co-ed baseball fundamental camp. Additionally, summer basketball clinics were supposed to start last week, with a second session slated for August.

The Westchester/Playa Neighborhood Council has opposed Councilman Bonin’s motion to establish tiny-house clusters for the homeless at two City beaches and two City parks, including Westchester. The local Park Advisory Board, which has not met since January 2020, has not taken a stand. According to a local source, the president of PAB and several board members were “fired” in late 2019 and have yet to be replaced.