WESTCHESTER -The Los Angeles Sheriff's Homeless Outreach Services Team (HOST) and Sheriff Alex Villanueva paid Westchester Park a visit Thursday. The HOST team and Villanueva were at the park to assess the growing homeless crisis. The visit didn't' go unnoticed. Shortly after Villanueva posted on social media about his stop, Councilman Mike Bonin pushed back on his Twitter account.

The councilman stated, "just two days after I proposed funds to help house people living in Westchester Park, Sheriff Villanueva strutted through, trying to preemptively take credit for their work."

Bonin is talking about a motion he put in front of the the LA City Council this week to move $1 million from the Council District 11 Neighborhood Service Enhancements Fund to an Encampment to Home program in Westchester. 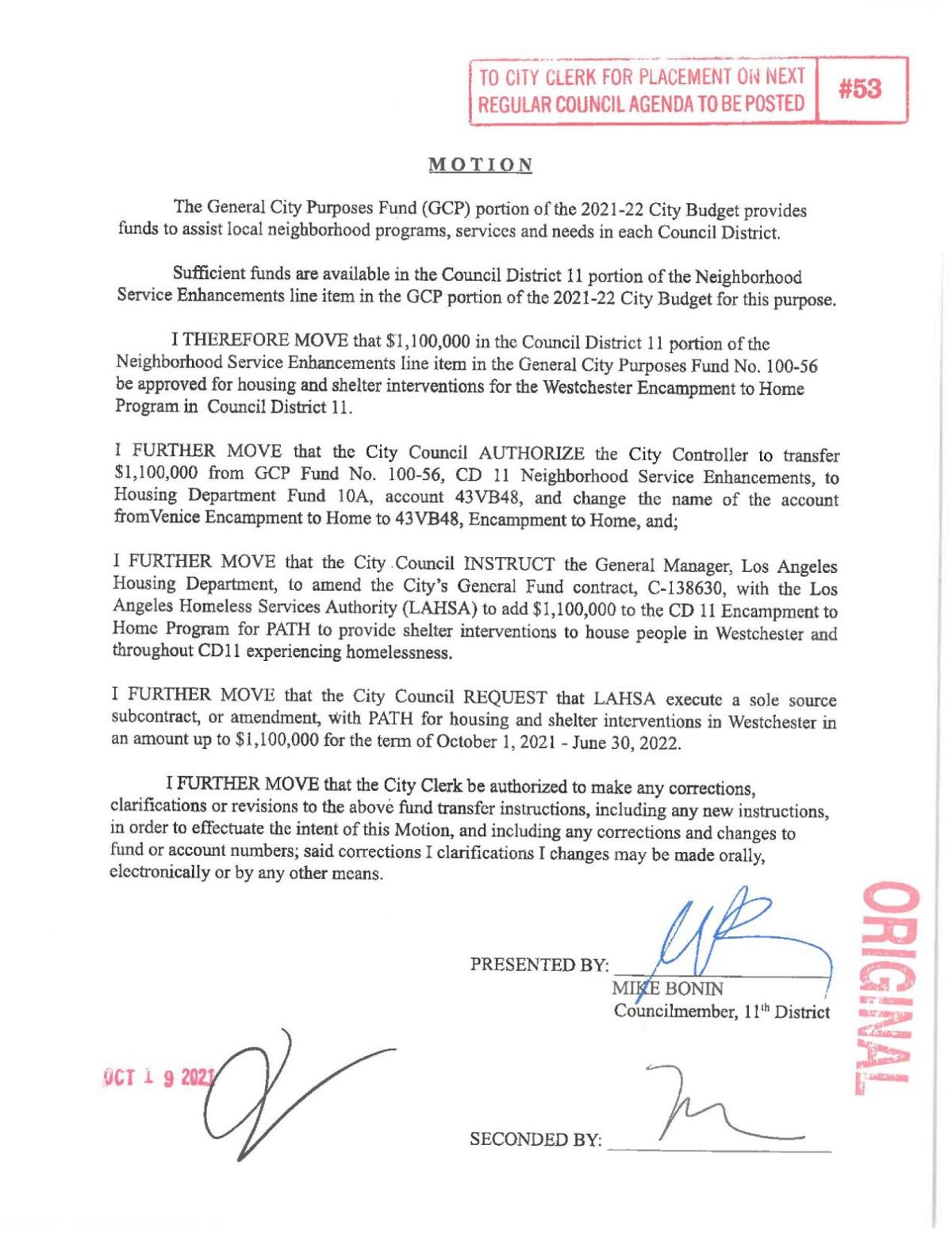 The motion calls for housing and shelter interventions for the homeless in Westchester Park and other unspecified areas in CD11. Funding for the program is slated from October 1 through June 30, 2022.  A timeline residents say is far too long to get the park in working order for youth sports and for seniors.

Last week, the Neighborhood Council of Westchester/Playa Homeless Committee met with Hannah Levine, Bonin's Deputy Director of Homelessness, to discuss the growing concern of the encampments at the park. Levine told the group during the meeting that completing two back-to-back Encampments to Home programs was not feasible. Also, during the meeting, Levine said that Bonin's office is looking at long-term supportive services, motel conversions, master leasing, rental subsidies, shared housing and reunification. However, when asked about specifics of any of the programs, Levine seemed lost for answers.

Multiple residents were on hand to express their growing concern about lack of effort by Bonin's office to deal with the encampments.

On Thursday, Sheriff Alex Villanueva paid the park a visit. It was his third connection with Westchester since July. On Monday, July 26, the sheriff held a public meeting about the growing homeless crisis at the park. That meeting was followed up by a visit from the HOST team to the park. On Thursday, the sheriff documented his visit on social media. In a Tweet to the councilman he said: " When did you decide to stop trying@mikebonin This is your field office. The seniors would like their center back and the kids would like to use the park.

When did you decide to stop trying @mikebonin? This is your field office. The seniors would like their center back and the kids would like to use the park. pic.twitter.com/ENCdvkHjOL

One resident stated that the homeless problem put an end to most sports at the park, including baseball, la crosse, and activities at the senior center located in the park. "It's an ongoing issue that our park has been taken over by the homeless.

In August, the Westside Current reported on the impact the encampments had on youth sports. In the report, parents we talked to said parks on the Westside have been like a second home to hundreds of kids who used the fields for team sports and a place to run free are now parks that house dangerous homeless encampments.

Rugby teams echoed that during last week's meeting. One coach told Levine that many teams are trying to find other fields to play in with little to no luck. "We usually play scrimmages and games in the park from December through May," she said. Adding, " With the state of the park, I can't understand how children are let on the fields. When will the park be cleaned up in order for kids to use the fields? "

There is no word on next steps from the Sheriff-or a timeline from Bonin's office.

As for the Venice Encampment to Home program, the Westside Current sent multiple emails to Bonin's office and other City Councils asking for a promised line-item budget and have not heard back.