LOS ANGELES -Los Angels City Councilmember Mark Ridley-Thomas and the former dean of the School of Social Work at a university in Southern California were indicted today on federal corruption charges that allege a bribery scheme in which a Ridley-Thomas relative received substantial benefits from the university in exchange for Ridley-Thomas supporting county contracts and lucrative contract amendments with the university while he served on the Los Angeles County Board of Supervisors. 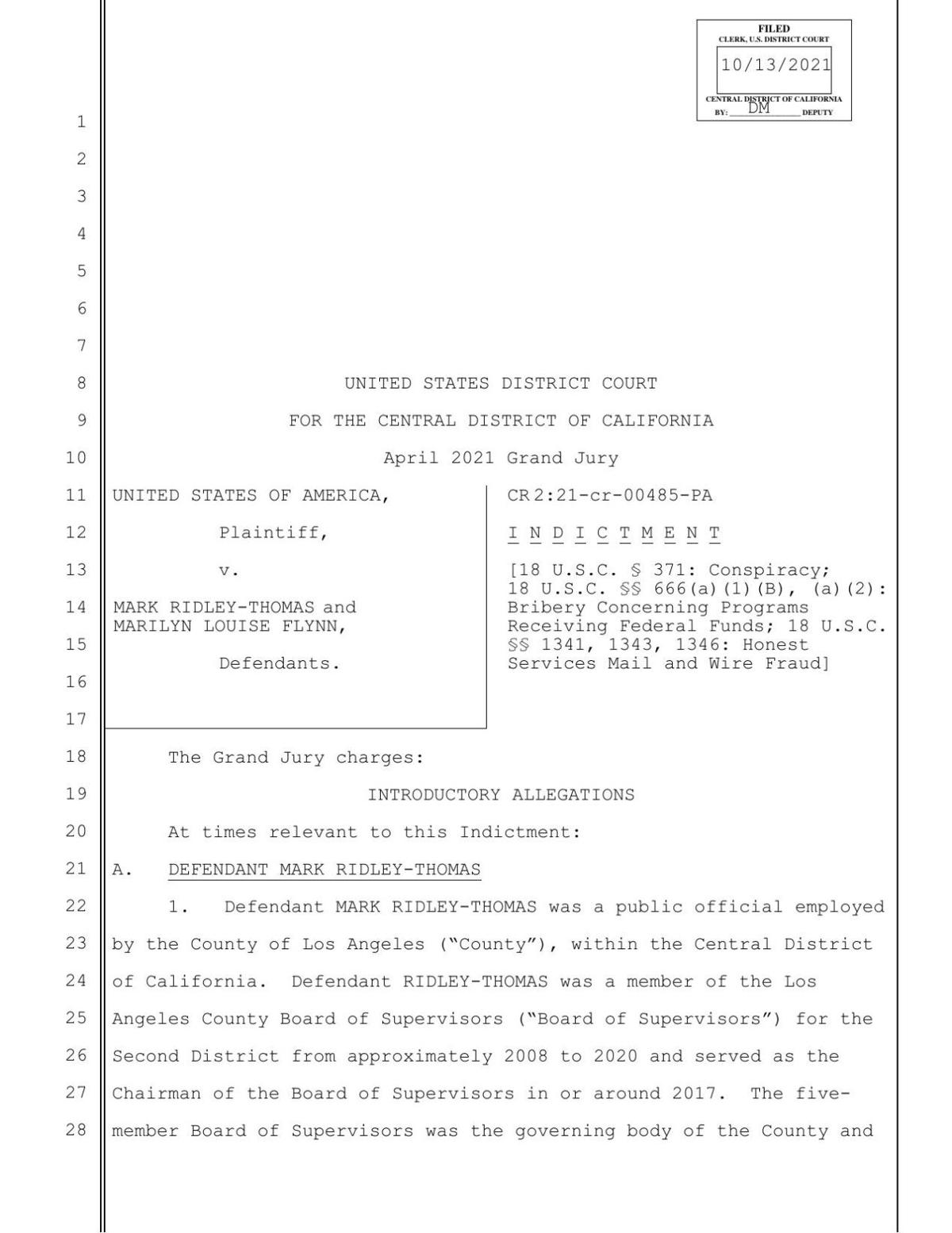 The 20-count indictment alleges that Ridley-Thomas, a former County Supervisor, conspired with Marilyn Louise Flynn, formerly a tenured professor and the dean of the university’s School of Social Work, who agreed to provide the Ridley-Thomas relative with graduate school admission, a full-tuition scholarship, a paid professorship, and a mechanism to funnel Ridley-Thomas campaign funds through the university to a non-profit to be operated by the relative.

In exchange, the indictment alleges, Ridley-Thomas supported contracts involving the Social Work School, including contracts to provide services to the Department of Children and Family Services (DCFS) and Probation Department, as well as an amendment to a contract with the Department of Mental Health (DMH) that would bring the school millions of dollars in new revenue.

Ridley-Thomas, 66, of Los Angeles, and Flynn, 83, also of Los Angeles, were informed of the indictment Wednesday, Oct. 13 and have agreed to appear for their arraignments in United States District Court in the coming weeks.

``This indictment charges a seasoned lawmaker who allegedly abused the
public's trust by taking official actions to benefit himself and his family
member,'' Acting U.S. Attorney Tracy L. Wilkison said in a statement. ``The
corrupt activities alleged in the indictment were facilitated by a major
university's high-ranking administrator whose desire for funding apparently
trumped notions of integrity and fair play. Public corruption cases are among
the most important matters we pursue, and we will continue to investigate and
prosecute whenever public officials and others entrusted with taxpayer funds
break the law.''

The indictment outlines an alleged scheme in 2017 and 2018 in which
then-Supervisor Ridley-Thomas sought benefits from Flynn and university
officials to benefit his close relative, who was the subject of an internal
sexual harassment investigation in the state Assembly, likely to resign from
elected office and significantly in debt.

The indictment did not name the relative, however, Ridley-Thomas' son,
Sebastian, resigned from the Assembly in 2017 amid investigations into
sexual harassment complaints. He insisted at the time that his resignation was
due to health reasons, not a sexual harassment probe. Sebastian Ridley-Thomas
later became a professor of social work and public policy at USC, although he
was later terminated over questions about his original appointment.

Prosecutors claim Mark Ridley-Thomas wanted to secure paid employment
for his relative to minimize any public fallout for them both in the wake of
the sudden resignation from office. Meanwhile, the Social Work School was
facing a multimillion-dollar budget deficit, which threatened the school's
viability as well as Flynn's position and reputation as the school's longtime
dean, according to the indictment.

As part of the bribery scheme, Ridley-Thomas and Flynn allegedly took
steps ``to disguise, conceal, and cover up the bribes, kickbacks and other
benefits'' Ridley-Thomas and his relative received -- which included concealing
the official acts Ridley-Thomas agreed to perform in exchange for the financial
benefits, according to the document.

The pair also concealed, according to the indictment, the true purpose
of the money funneled to the relative's nonprofit through the university,
which also violated multiple university policies regarding the funding of
nonprofits, prosecutors said.

Within weeks of Ridley-Thomas contacting Flynn in May 2017 about his
relative wanting a postgraduate degree from the university, Flynn began a
campaign to secure both university admission and a full scholarship for the
relative, prosecutors allege.

Flynn wrote in an email that she intended to open every door for the
family member, the indictment alleges. When a university official said Ridley-
Thomas had ``lots of discretionary money'' and should give the university ``$1M each year for three years,'' according to the indictment, Flynn responded that she and another university official intended to offer the relative a full
scholarship in exchange for funds for the school.

In June 2017, Ridley-Thomas and Flynn allegedly reached an agreement,
which Flynn later memorialized in a confidential letter she had hand-delivered
to Ridley-Thomas, prosecutors said. The indictment alleges that Flynn's letter
detailed her expectations that Ridley-Thomas would steer new contracts with
DCFS and Probation to the Social Work School and secure a lucrative amendment to an existing Telehealth-DMH contract.

With the new amendment, Flynn expected the Telehealth contract to
generate about $9 million per year for the School of Social Work, prosecutors
contend.

The indictment alleges that Ridley-Thomas took a series of official
actions, including voting in August 2017 to approve a motion to establish a
partnership between the county and Social Work School, and voting in October
2017 to approve a motion, related to ``Probation University,'' that would
create a county payment source for the school. Flynn told university officials in emails that she was ``very happy to see that (Ridley-Thomas) was as good as his word'' and that he was ``really trying to deliver,'' the indictment alleges.

The conspiracy count alleged in the indictment carries a penalty of up
to five years in federal prison. Each bribery count carries a maximum
possible sentence of 10 years. Each of the mail fraud and wire fraud charges
carry a penalty of up to 20 years.

Los Angeles City Councilman Joe Buscaino, a candidate for mayor, has called Ridley-Thomas to resign in light of his indictment on the charges. Buscaino says on Twitter he is ``shocked, saddened and disgusted'' by the charges, which he says ``tarnish the reputation of the entire LA City Council.''

This is a developing story. Information from City News Service was used for this report.