Numerous petitions and emails have circulated since Councilman Mike Bonin proposed putting temporary shelters in a number of public and [some ] private places on the Westside.

Bonin is also looking at building single-occupancy tiny-homes or safe camping sites on a property owned by Culver City for a joint LA-Culver City program and at an undetermined location at LAX. 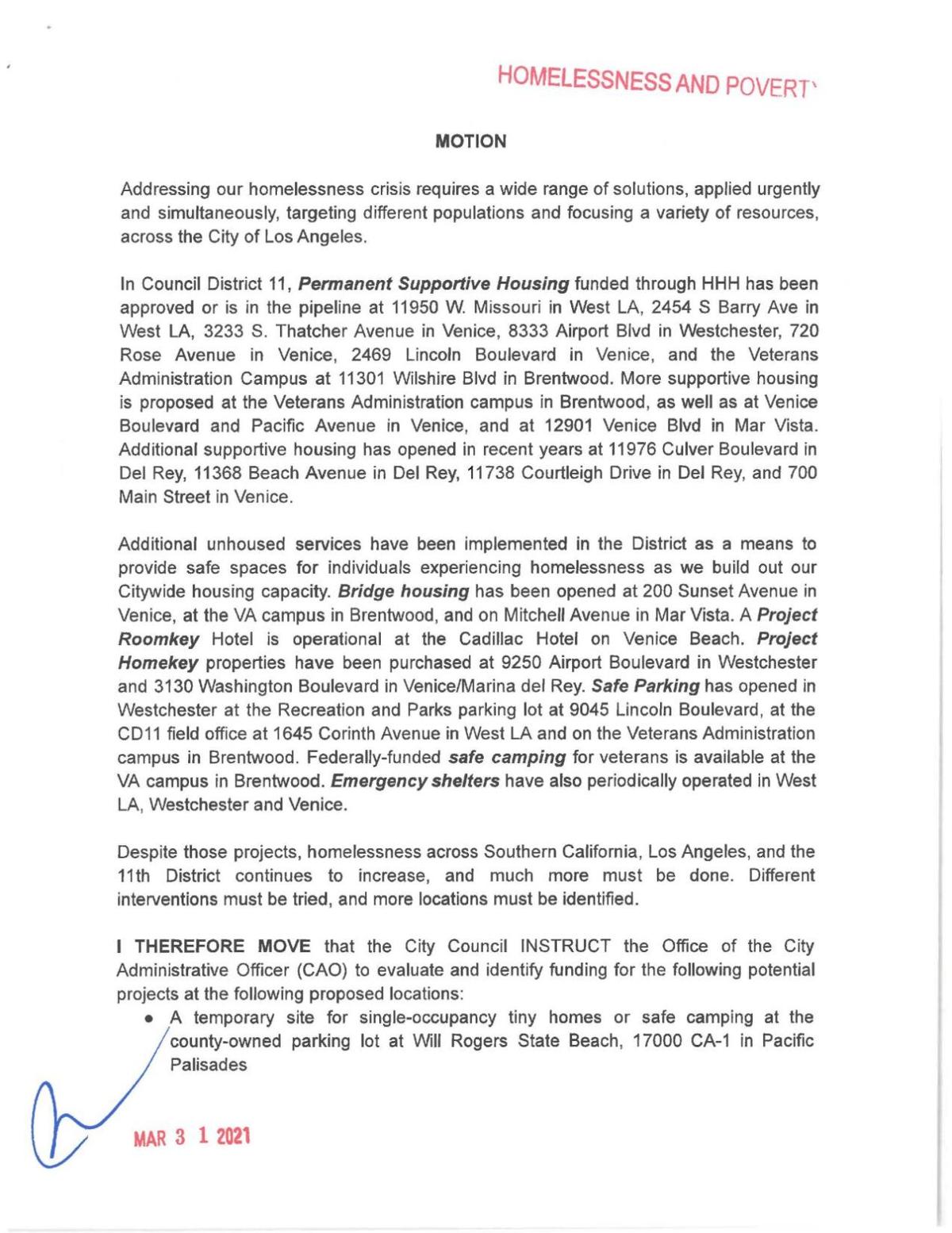 Numerous communities opposed to the motion have one thing in common; they cite empty promises made to Venice by Bonin as a reason not to build in their neighborhoods.

The email read, "Over the past 30 hours, the BCC has received an overwhelming response from residents regarding the April 4 homicide on San Vicente and Councilman Mike Bonin's motion seeking homeless shelters on local beaches.

The BCC said, "We are one community among many in CD11 and draw your attention to our many neighbors, including the Venice Neighborhood Council's unanimous vote of no confidence for Bonin's homelessness policy."

The Council encouraged everyone to read the sense of frustration, anger and persistent calls for effective leadership across the community.

The email cites Bonin's broken promises in Venice-- including the rise in crime-- and lack of promised cleaning and no-camping around the Venice Bridge Home  as a reason to rally against the motion for more shelters. It also calls for accountability and a call to action to push both Bonin and Supervisor Sheila Kuehl to do more in regards to addressing the drug and mental health crisis the district faces. "Bonin and Kuehls are trying to combat street homelessness with 'dribs and drabs' of housing people with intense psychosocial disorders. They are trying to make our neighborhood a mental hospital instead of building what they need with all that Prop H money."

The Pacific Palisades Community Council will hold a discussion this week on the proposal to build a temporary site for single-occupancy tiny-homes or safe camping at Will Rogers State Beach.

Nearly 5000 residents have signed a petition against the motion.

The author of the petition said, if [the motion is] approved by the City Council, people who are homeless because of drugs and mental illness will have the legal right to live in the parking lot at our public beach in Pacific Palisades.

"Homelessness is an obvious problem but this is not a solution, it is simply brushing the problem under the rug and creating a whole other set of potential problems such as crime and danger to our families and children who use these public beaches on a weekly basis. Simply look at Venice Beach and it is clear this does not provide help or assistance to this community...and it negatively impacts every other resident who lives responsibly in that neighborhood," said the writer of the petition.

A Mar Vista resident who has witnessed the documented failures of the 405 underpass pushed back against building temporary shelters at the Mar Vista Park: "As much as I believe in the potential value of tiny home sites or safe camping sites, it is very hard to trust any plan put forth by Mike Bonin. This is the man who swore to neighbors that a Venice Bridge Home would be safe and beneficial for all, only to have the surrounding area devolve into utter anarchy and danger."

"This is the man who placed the Penmark Park encampment members into Mar Vista motels, only to have the areas around the motels devolve into crime and chaos, not to mention the fact that most of the people placed in the motels eventually left the premises because of the rules."

The writer goes on to say that, "Just envisioning Mar Vista Park filled with tents breaks my heart. Parks are supposed to be for the entire community, but mostly for the children. I cannot imagine children playing in a place where there could be feces, needles, or danger. How are we to trust that the Mar Vista Park will not turn out like the Venice bridge home or the commandeered motels?"

A Westchester Petition is also circulating opposed to [more] shelters at Westchester Park: "Our community deserves better than the crime, violence, and unsanitary conditions that exist in the only public space dedicated to recreation in our neighborhood," the petition states.

"As we emerge from the pandemic, safety in the park is essential to the physical and mental health of our children, seniors, students, athletes, and all residents of Westchester." 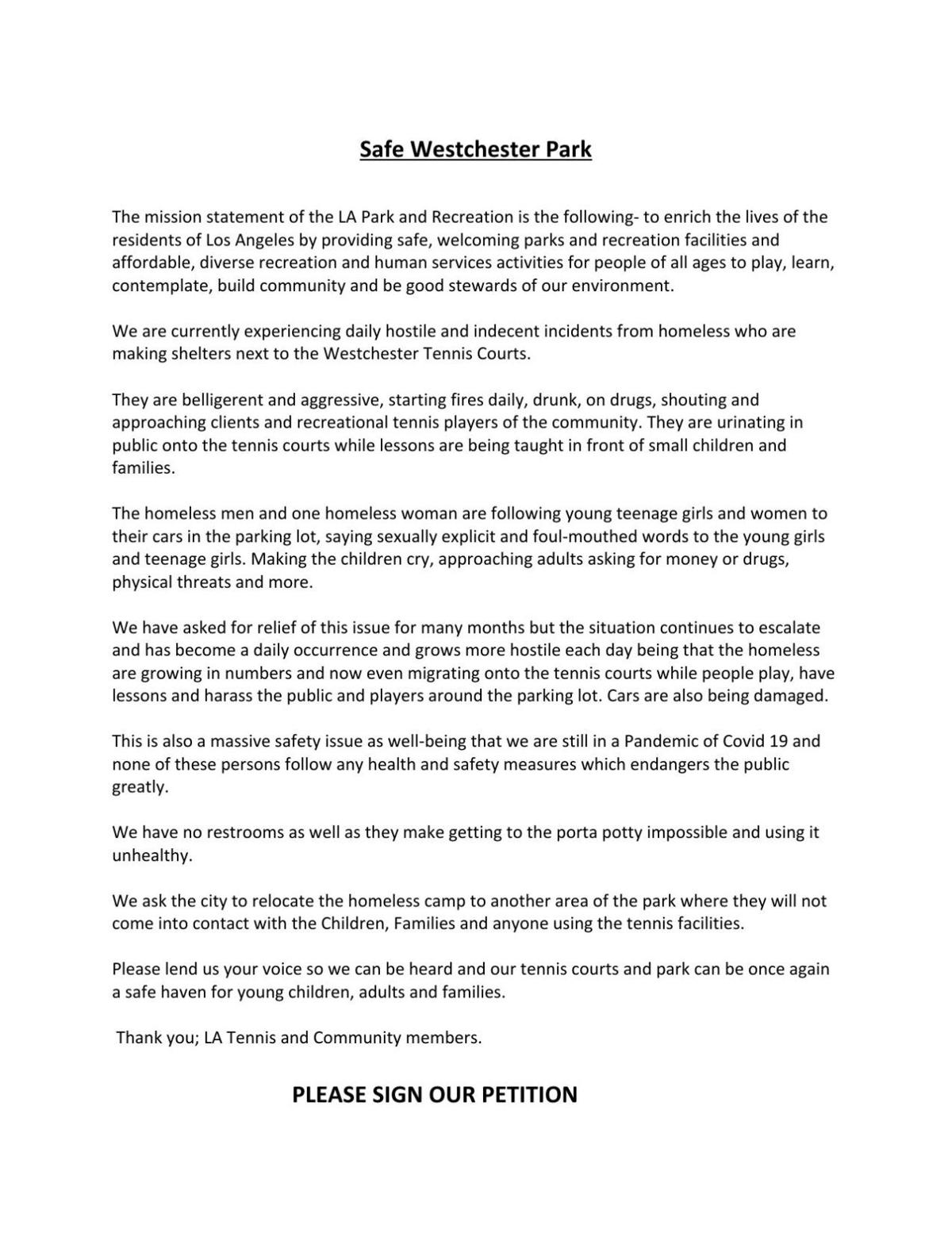 Bonin is scheduled to attend the Westchester Neighborhood Council meeting tonight to discuss the Motion.  The meeting is being held via Zoom and starts at 6:30 p.m. You can log in to make public comment at this Zoom link: https://us02web.zoom.us/j/89855522970

A recall Mike Bonin petition on Change.org is gaining traction [again]. Since last week's announcement of the shelters, the petition is up to almost 3,000 signatures. Comments on the petition read, "Horrified at how folks in Venice and other neighborhoods are left to fend for themselves amidst the lawlessness of homeless encampments and temporary shelters."

"I’m signing this because Bonnin has destroyed the WestSide and is doing nothing to clean it up! We need change."

Mike Bonin continues to be the only candidate vying for the 2022 Council District 11 seat.

According to documents filed on the Los Angeles Ethics Commission website, Bonin submitted the three forms needed for a 2022 candidacy for the CD11 City Council seat. He is the only candidate at this time to do so.

Candidates cannot officially file a declaration to run until later in 2021, but they can raise money for the race. Something Bonin has started, according to disclosure papers.

“The Chamber of Commerce is opposing this motion,” said Fay Vahdani, the Chamber’s representative on the Pacific Palisades Community Council. …