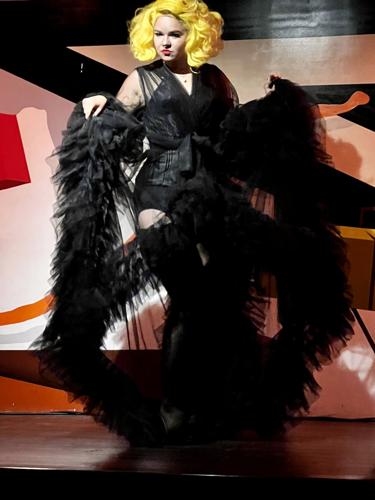 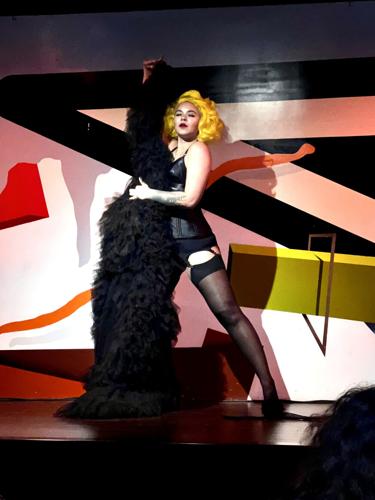 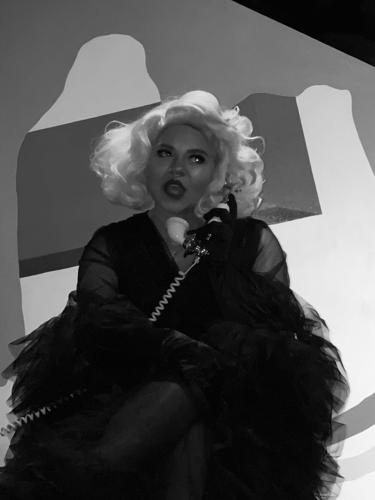 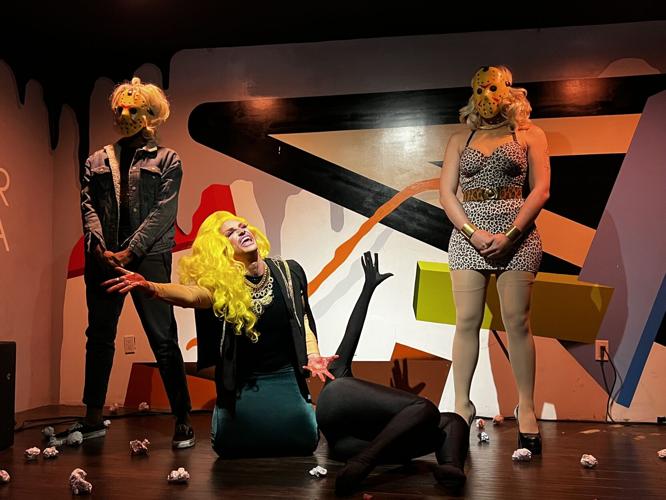 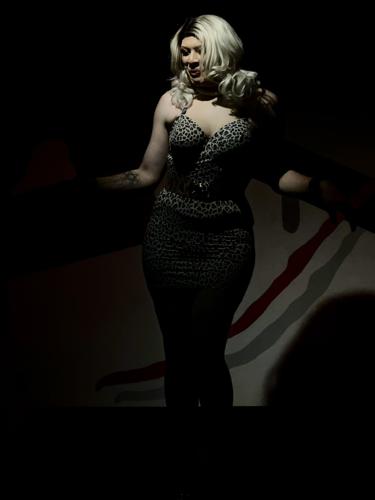 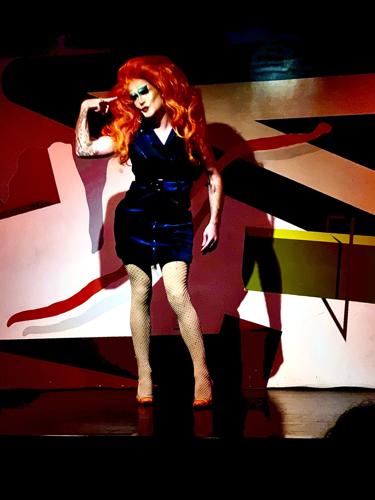 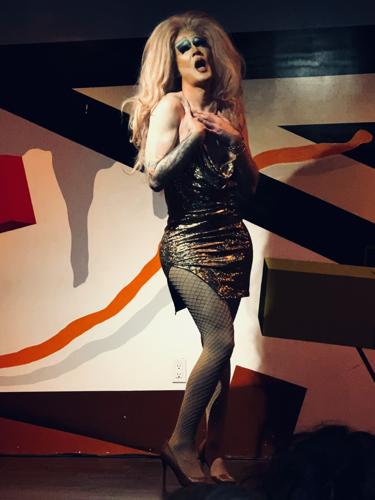 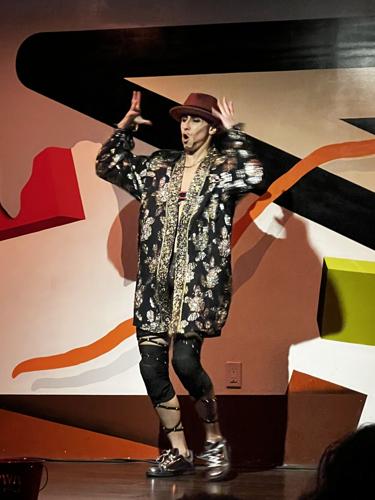 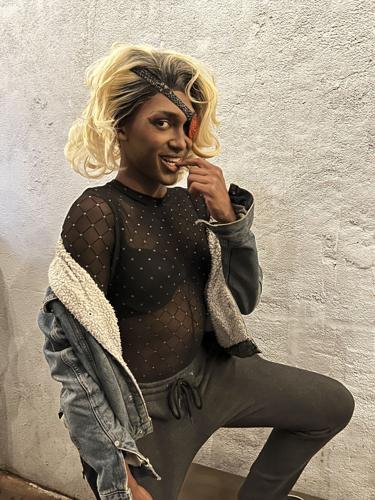 MAR VISTA- Outside ArtBar on Venice Boulevard in Mar Vista, the drag queens of the Queens of the West show are sipping beer and talking about where they got their stage names.

“I was joking with friends and they looked at me like, you are so facetious,” says Facisha Farce, in a leopard print dress and blonde wig, “and I looked at them like, what does that mean? I went to public school.”

She pauses with a performer’s timing as everyone laughs.

Jenna Seikwah, pronounced like the French phrase je ne sais quoi, says she can also be facetious with her stage name.

“It's funny because I'll say it means something in French, but I don't know what. And they’ll say, ‘You know, it means like this quality that you have that’s indescribable,’ and I'm like yeah, it does mean that but I don’t know what.”

“I'm also Sicilian, so I had Valentino, like Prince Valentino. But that was definitely not the first name I came up with my first performance. It was something really stupid, like Dapper Boy Valentino.”

Everyone laughs. “What, you didn’t want to be a 2003 screen name?” asks the show’s founder and co-host, Emma Roidz. Her name is self-explanatory.

“It didn’t roll off the tongue,” Prinze continues. “So, Prinze Valentino suits me.”

“So the first question we're talking about is how does your relationship with your father inform your drag?” Facisha asks and everyone laughs.

“No, it's hilarious that that's the first question because I…” Lighting a blunt, Tsai-Clops starts to answer to more laughter before Jenna clarifies they’re talking about how they came up with their drag names.

“I came up with it by gay bashing,” Tsai-Clops says as everyone is quiet. “Sorry, that’s literally a JuJuBee moment [a performer from RuPaul’s Drag Race show].”

“People ask, where does your humor come from? My eye passing. I was gay bashed. I was already doing drag. I started doing drag as Kia Optima, but I was really busy before the pandemic, working and going to school at the same time and so it left little time for Kia to come out. And then the pandemic happened. I was working double time and staying afloat, doing fine.”

“And then next thing you know, I start a second job. And my second job puts me in harm's way and I end up getting attacked. I was left blind. Did not expect it. But then I realized, hey, I can make money off it. And so I just picked the name Tsai-Clops because why not poke fun at it? Especially because Tsai’s my actual middle name. Maybe it’s serendipity that was supposed to happen.”

Everyone sits quietly for a few moments.

Facisha breaks the ice: “I did not see that coming.”

Tsai looks up in mock outrage, “I’m going to throw this blunt at you!”

“I'm sorry—I didn't want to take the mood down,” continues Tsai-Clops, “because I feel like a lot of people hear the disability part and a lot of people will just see it and think oh, ‘it's a gag.’ It is a brand, it is an aesthetic, but it's an aesthetic that I'm choosing, from what has already happened in my real life. It's like when queens make comedy off of trauma. That's essentially what my name and what my drag is, making light out of darkness.”

Prinze feels the same, talking about the first time they saw a drag king perform.

“Aside from really helping me explore my gender, I feel like drag's been a platform for me to honestly process a lot of trauma,” they say. “Whatever I'm really feeling that month, I usually create new acts. It's just really to try to process some bullshit I’ve been through. Yeah, I think it's an amazing artform for everyone to explore their gender or just process trauma in a beautiful art form.”

Even if their stories aren’t as traumatic, the other performers discuss what draws them to perform in drag.

“I have an incredibly creative job—accounting,” Emma deadpans.

“I feel like drag is such a multifaceted way to express yourself,” she continues. “There's you know, dancing, singing, lip-syncing, performing, styling, makeup…it's so involved that you really feel the expression once you perform. You get the love from the audience. You feel like all your work pays off and it gives you purpose…to get back and do more spreadsheets.”

Facisha says she went to her first drag show when she came out in 2015.

“Performing and being on stage can be so much more than just validation and attention,” she says. She remembers seeing an “elder queen” comforting someone who had found their first “queer space” during a gay pride event in Eugene, Oregon.

“I thought not only can I get validation and feel my oats,” Facisha says, “but I can also help people and create events that help people connect and get together and create a safe place.”

And a safe place is what Emma has created with the monthly show, Queens of the West. She started the “alternative drag” show in August 2021, co-hosting with different queens and assembling diverse lineups for every month’s theme. March was “March MadnSass.” The next show, on April 9 at 8 p.m., will be “April Showerz.”

“They [the owners of ArtBar] were really excited about it,” Emma says, “bringing more queerness to Mar Vista and art in general. It really took off from there.”

“I would say there isn't much drag appearing all over the Westside,” Emma continues. “And there's a lot of space for it because a lot of bars just have unfilled nights with no events going on. ArtBar is a great space because it has a stage, which I think is integral to the freedom of a show. But yeah, the Westside could use a lot more drag. It's kind of centralized in L.A., in West Hollywood or downtown. I think here’s a great opportunity for people who maybe aren’t in those other circles.”

Inside, Emma and Jenna start the show, jumping on the stage at the back of ArtBar as the DJ turns the music down. They go over the rules: keep up the energy, keep drinking, and keep tipping (performers and bartenders).

“Crocs are like $45,” Gary adds, looking down at the Crocs he’s wearing as the audience laughs. “And thanks for spending $100 in gas money to get here.”

Facisha kicks off the show, dancing to a remix of Dolly Parton’s “9 to 5.” Porshaa Lejayy dances to a mashup of Madonna’s “Vogue” and Chaka Khan’s “I’m Every Woman.” Prinze Valentino lip-syncs passionately to an Usher song.

Emma and Jenna pull three volunteers up on stage for a game. They ask all three what they’d give up for Lent if it would stop the Russian invasion of Ukraine. A woman named Sam, who answered that she’d give up capitalism, wins the prize: a box of chocolates.

Daddy Longlegs performs a Lady Gaga song. Jenna does a Kelly Clarkson song. Later, Jenna will describe her own look—a large orange wig, a dark blue dress and fishnets—as “Clarkson meets Bozo (the clown)…I like to have fun and get a laugh.”

Each performer works the room as the audience showers them with tips, mostly dollar bills handed to them or thrown on stage, which they scoop up, known as “cabbage picking.”

After a brief intermission, the second half starts with a birthday. Brett’s turning 27. “Did we just bring him up here to make fun of him?” Jenna asks, before the crowd sings “Happy Birthday.”

His birthday present, Emma says as she shoos him off stage, is “the sweet release from public embarrassment.”

Tsai Clops dances to a Jordin Sparks song. As she gathers her tips, she notices a $20 bill in the mix.

“Whoever left me twenty-dollar tips both times…meet me in the back,” she says jokingly.

After Daddy Longlegs does a Lizzo song and Jenna does a Robyn song, another game commences on stage.

Four volunteers are pitted against each other in a twerk-off. One guy introduces himself as Dom. “Nice to meet you, Dom” Jenna says. “I’m sub.”

The first two contestants awkwardly twerk to the decidedly untwerkable Titanic theme by Celine Dion. The other two attempt to twerk to Sarah McLachlan’s “Angel,” the morose ballad from anti-animal cruelty commercials. Dom dominates and wins the prize, another box of chocolate.

Emma closes the show, performing a power ballad as she mock-kills someone wearing a Vladimir Putin mask, while two others stand guard nearby in hockey masks.

Jenna asks if the audience had a good time over the final applause. “That’s why we do this. We enjoy bringing joy and laughter and silliness and crazy things and beauty and all of the above to you.”

After the show, as the audience trickles out and DJ takes over the afterparty, Emma says she tries to do something topical on each show.

“I think it's a way to make a performance impactful,” she says. “Also, it’s sometimes easier on the body when you can score laps without doing the splits. We all play to our strengths.”

She says drag shows are becoming more mainstream and shows like “RuPaul’s Drag Race” have made a difference.

“Masculinity was still very prized, even like five years ago,” Emma says, “whereas now it's kind of falling to the wayside of it. At least, queerness is open and the drag queen or king is the coolest thing. Sign of the times. So it's easier for us to be open to everyone we meet.”

Jenna agrees and sees the difference with a show she hosts downtown.

“We definitely are privileged to live in a time where people came before us made it okay for us to be out in public,” Jenna says. “Right on the edge of kind of Skid Row, I feel comfortable just striding down the street because I know that there are people that came before me that did get beat up or that got murdered. Now it has become mainstream enough, half the time I walk down the street and I get hit on.”

“Also, I feel like 10 years ago, there would never be a drag show in a straight bar. It was kind of confined to gay bars. Nowadays, it is a lot more open and a straight bar will have a drag night, where it's more integrated into our society.”